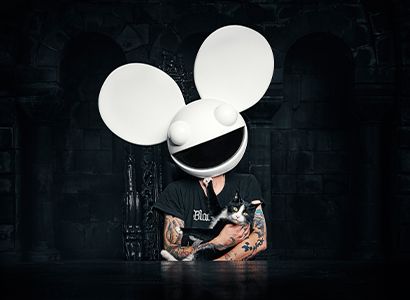 Reserved seating is available for $285 and guarantees a seat in the reserved section. If necessary groups will be paired together at tables. Seating is based on time of purchase and the configuration of groups.

In the two years since his last album, Canadian superstar producer deadmau5 has undergone a lot of changes. He moved from the city life of Toronto, where he couldn’t drive any of his car collection over 20 MPH due to traffic and congestion, to a farm in the country where he has chickens, ducks, goats and a 33-year-old horse named Joey.

deadmau5, real name Joel Zimmerman, estimates “eighty percent” of his sixth studio album, W:/2016ALBUM/ was made in the new place. Earlier this year he debuted online his new award-winning studio in his country home. The studio, designed by Pilchner Schoustal, features a sound system with two mounted ATC 300 speakers, a series of ATC 25 ceiling speakers, a 5.1 and 7.1 mid field surround system and 11.3 Dolby Atmos system.

For those radio announcers and TV hosts who need to say the name of the album aloud, it is pronounced ‘W drive 2016 album,’ named after the drive on the computer where the album was located. The 11-song collection starts with the old-school electronic vive of “4Ware,” pronounced “Aware,” a track Zimmerman cryptically says was “written for another project.” He adds, “It’ll all make sense eventually.” Even without knowing the song’s origins his fans went crazy for the nine-minute track when he uploaded it online this past March.

The album is a mix of material written over the last few years. He says “Cat Thruster” has “like eight different versions.” One of the album’s centerpiece selections, the 11-minute and-30 second “Let Go” features moody atmospheric vocals from Grabbitz. Originally released as an instrumental called “Silent Picture,” the indie vocalist/song-writer created a bootleg vocal for the track, then renamed “Blood For the Bloodgoat.” Today it stands revised as the album-worthy “Let Go.”

For deadmau5, who could bring in some of the biggest names in music, there is something satisfying about showcasing new artists. “I love it, I love meeting new talented artists that don’t already have their thing going on and are blowing up millions, because, to me, that just feels like a money play,” he says. “I don’t give a shit, if it works, it works. And if it’s a good sound then we make it happen.”

That is what makes deadmau5 the unique artist he is though. He is not about being contrarian or being number one on the pop charts, he is just about satisfying his own artistic cravings. So when the Toronto Maple Leafs approached him about writing a new anthem to celebrate 100 years of the team he composed the track “2448.” In an interview with nhl.com deadmau5 spoke of the honor.

“I got an email from management asking if I would consider doing it and I was like heck yeah,” he told the site. “I knew I had to do something that was palatable and worked for the crowd and also lend itself to some audience participation. These thoughts all formed in my head before I even sat down.”

The rising techno of the superb “Imaginary Friends” was inspired by deadmau5’s own love for gaming, specifically eSports, though his gaming habit goes well beyond just playing. Earlier this year he created his own virtual reality app.

That the album can go from atmospheric to techno to old-school synths is reflective of where deadmau5 is right now musically. “I’m starting to appreciate or at least come to grips with it’s okay to just end the song and then do another one. I’m not a DJ, I’m not up there blending songs together in a harmonious way that aren’t mine, that create this seamless flow,” he says.

“I’ve been experimenting with that recently in my shows where I just let a track run out and then immediately after give it a little breather for two seconds, three seconds, just black, and then start a 115 BPM down-tempo track. It’s getting me out of the mold of being locked into the program of making sure everything has to mix seamlessly and the show has to start at zero, end at 75 minutes and it’s gotta be 128 BPM all the way through. So I’m taking solace in breaking my show up into individual songs that have varying tempos, varying moods and then just ending them, then doing the next thing.”

He has played several of the songs live over the last two years with the slow building “No Problem,” a song whose quirky intro of bells and synths is reminiscent of Tom Waits’ “What’s He Building In There,” “Crushing it” as deadmau5 says.

The deadmau5 live experience has long been one of the most invigorating in music, taking listeners on a complete journey that melds his signature sound with a state of the art live show. He will be taking W:/2016ALBUM/ on the road in 2017 with a new live show and an even bigger cube.
“We’re pushing because we’ve started the mechanicals for the engineering of this new cube thing, it’s pretty cool. It’s like a crazy upgraded version of the last one,” he says. “As I’m working on the visuals of my show I get these kind of cool pulsating effects with geometry and cube mapping.”

For deadmau5, everything is about giving back to the fans. He spoke about that to the New York Times earlier this year. “I really come from a sort of low-income family, right? And now all of a sudden I’m worth millions and I feel like I need to justify that always because I would hate to think someone out there would believe that I’m making millions of dollars and just going out there and bottle popping and flying on jets and doing crazy amounts of shit,” he told them. “I’m not, literally money in, money out, is my big thing right now and it’s like money in, big studio gear.”